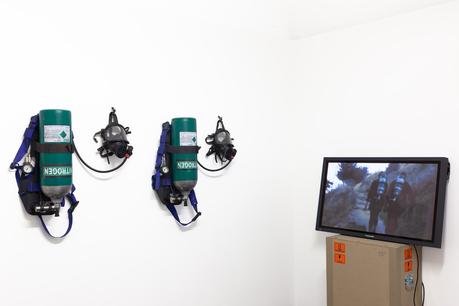 Means to an End

​General principles:
In moments of engagement effective artworks supplement a willing audience’s capacity to imaginatively summon whatever meaning they may long for, or find novel and amusing. Art may also help shoulder the burden of bêtes noires – things too stygian to imagine alone and unassisted. Art may litigate against precedential denotation – against meaning an artist may see as limiting or constrictive. Artworks of this type often disqualify themselves by claiming revolutionary virtue.
Precis:
“It is not worth the bother of killing yourself, since you always kill yourself too late."     -  E.M. Cioran, The Trouble with Being Born.
Means to an End’s raison d'être is to flat footedly forward - rather than recommend - a method, or means, to an end. The aggregate work is structurally/visually composed to pretend to aesthetics.
Means to an End nods appreciatively, but apprehensively, to Lev Manovich’s habit of cold-bloodedly flow-charting all contemporary visual culture, including: visual art, cinema, architecture, product design, fashion, interface design, informational architecture, and so-called new media art … into one catchall term; “info-aesthetics.” I prefer the un-hyphenated, ‘Informational Aesthetics’.
Art About Art
Means to an End functions secondarily as a sort of maledictory antidote to relational aesthetics encouragement of diabetic coma. Means to an End is, in some ways, an amoral, multi-dimensional, photo-negative of relational aesthetics two-dimensional public-choreograph of virtue. Means to an end doesn’t mean to be bad it certainly doesn’t aspire to imago Dei.

Roger Boyce is represented by Suite